A group of expats from six different countries, including the United Kingdom, Bangladesh, and Botswana, joined the latest Discover WND trip in Wuxi on May 15.

During their trip they got to join the celebrations for an International Day event being held at Boston International School, as well as taking in the scenery of Taihu Lake at Daxigang Wetland Park later that afternoon.

At the school, the group watched a colorful parade featuring the flags of countries from around the world. They also got to tour the various stalls set up for the event, with many of them trying their hand at Chinese cultural traditions such as making sugar paintings, creating paper cuttings, and playing the erhu. 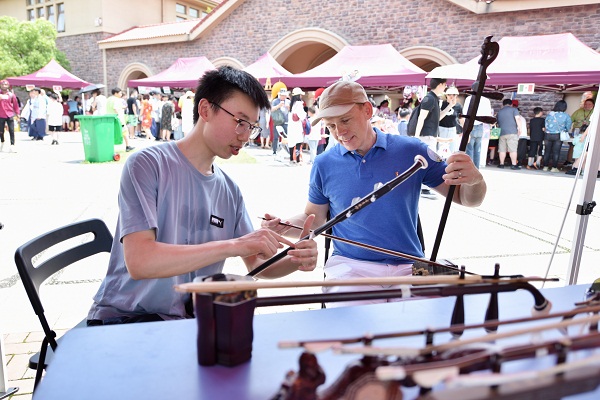 Stephen Mclone learns to play the erhu at Boston International School in Wuxi on May 15. [Photo provided to wndonline.cn]

British expat Stephen Mclone had a go at playing Twinkle Twinkle Little Star for his daughter using the erhu. "I think it would be very difficult to get to a good level. There are only two strings on the erhu, but it can make an even more beautiful sound than a guitar with six strings, or a violin with four," said Mclone.

The erhu, one of the most representative traditional music instruments in the southern Yangtze River Delta area, was first produced in Meicun in 1965. An erhu guild has since been set up, riding on the established "Meicun brand", with around 40,000 of the instruments produced in the city each year. 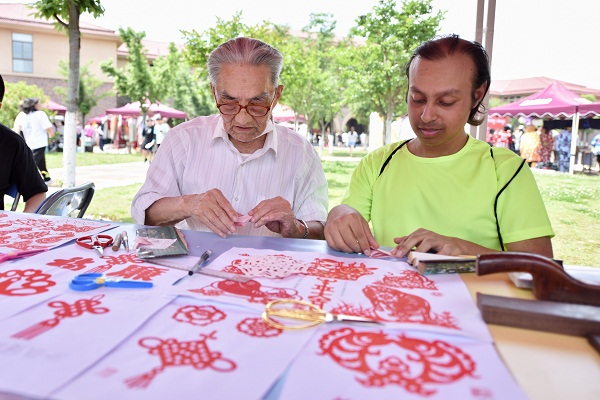 The complexity and uniqueness of paper-cutting is so fascinating, said Obakeng Galeboe, a Botswanan student from Jiangnan University.

In the afternoon, participants headed to Daxigang Wetland Park in Xinwu district to enjoy the beautiful scenery beside Taihu Lake.

The event was held to give local expats an opportunity to discover more about Wuxi, its history and traditions. Since 2019, there have been six Discover WND events organized by China Daily and the publicity department of Xinwu district.