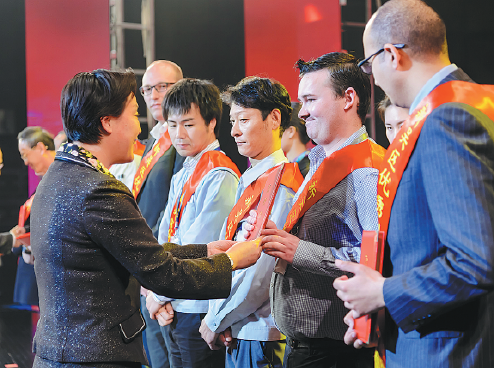 James Skinner, a media worker from the United Kingdom, is presented with an award from the local government in April 2018 for his contribution to Xinwu district. [Photo/China Daily]

Having lived in Xinwu district for nearly five years, I feel I can speak with some authority about my experiences of living in this fascinating part of Wuxi in East China's Jiangsu province.

Born in the United Kingdom, I came to this part of China in 2016 for a new job working in the media industry. I knew nothing of the area and had done little to no research about what my new home might be like.

To be honest, during my first few days here, I wondered if I had made a mistake. The crowds of people, the strange place names and unfamiliar foods gave me a serious dose of culture shock.

However, after a few weeks spent finding an apartment, identifying the best places for takeout and working out how to get around－I began to appreciate what the area had to offer. It was modern and vibrant, with a lively bar and restaurant scene comparable to any Western city.

Living in a comfortable apartment near Changjiang North Road, I was able to explore some of the highlights of my new home. Soon, I was regularly enjoying meals at the numerous local Korean and Japanese restaurants that can be found along the Holiday Plaza, a local entertainment zone. I quickly discovered more places of interest during lengthy walks around the area, exploring thousands of shops selling pretty much anything anyone could want, from Chinese spirits to imported food.

After a few months of living in the district, I felt fairly settled and was enjoying my new job. My company is based in a particularly impressive part of Xinwu－Wuxi (National) Software Park, where some of China's most cutting-edge tech firms are based. Walking around the park at lunchtimes, it really gives one a sense of how Xinwu is likely to be at the forefront of developing future technologies, particularly internet of things applications.

These days, I feel truly at home here－and so much has happened during my time in Xinwu. I have moved apartments no less than four times, adopted several dogs, become an expert on all the best international restaurants, and made a fantastic bunch of friends.

For expats, the district's economy offers a healthy selection of jobs, with demand for everything from English teachers to engineers. And over the past few years, I have met foreigners employed in a diverse range of industries, with many increasingly choosing to take advantage of local preferential policies to set up their own businesses, allowing them to put down roots and make a long-term commitment to the area. Since many live here with young children, the availability of good international schools is another important reason to stay put.

1 2 Next Page
Leave Your Message Here