Wuxi a magnet for foreign investment 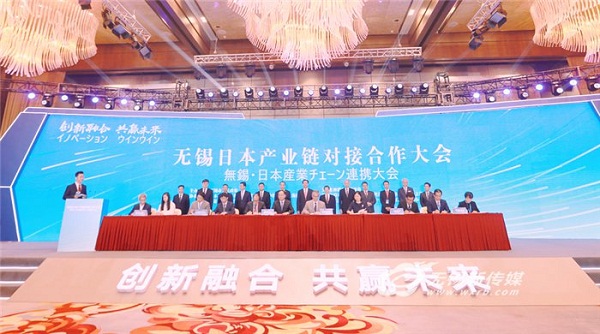 A total of 104 Fortune Global 500 companies have established 209 foreign-invested enterprises in Wuxi, East China's Jiangsu province, according to a statement at the Sino-Japan Enterprises Cooperation Forum on March 26.

The city has been carrying out economic and trade exchanges with over 220 countries and regions around the world, with its actual use of foreign capital last year hitting $67.9 billion.

In order to promote industrial transformation and high-quality economic development, the city released a series of favorable polices over the past three years to upgrade its business environment and support key emerging industries, including internet of things, integrated circuits, biomedicine, and intelligent manufacturing.

In 2020,Wuxi's imports and exports totaled $87.78 billion, ranking second in Jiangsu province. Wuxi-based enterprises spent a total of $14.2 billion doing business in 92 countries and regions around the world, according to officials.

Wuxi is now home to over 1,200 Japanese companies in an effort to carry out exchanges and cooperation with Japan related to technology, industry, and culture. In 2020, total imports and exports between the two sides reached $10.37 billion.

Zhou Changqing, vice-mayor of Wuxi, said that the city will continue to promote Sino-Japan cooperation during the 14th Five-Year Plan (2021-25) period, especially in industries such as integrated circuits, machinery manufacturing, and automobiles.